An Idea That Bloomed 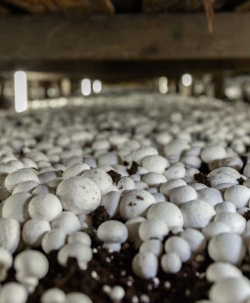 During the late 1800s, William Swayne was a successful florist in Kennett Square, PA. He had an idea to grow mushrooms beneath his 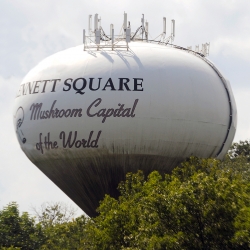 greenhouse benches. He sent to England for spawn, and the results were encouraging enough that he built the first mushroom house in the area. His son, J. Bancroft Swayne, returning from college, took over the mushroom business and made it a commercial success, eventually developing a spawn plant and a cannery in addition to the growing houses.

Inspired by the Swayne success and the attractive price of mushrooms in city markets, others began the production of mushrooms as their principal occupation. For more than 100 years, mushroom farmers have been growing mushrooms in southeastern Pennsylvania.

Today, more than 60 percent of all mushrooms produced in the U.S. are grown in Kennett Square, PA, and its surrounding areas, stretching to Berks County, PA and parts or northeastern MD. In 2020, Agaricus mushroom volume of sales totaled 796 million pounds, with PA accounting for 66 percent of the total volume of sales.

According to a 2017 economic study, the PA mushroom industry has a footprint of $764 million. Sales of PA mushrooms and of the inputs to produce mushrooms – including 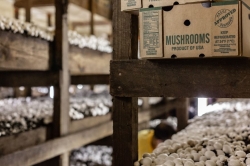 spawn, casing, and compost – bring money from around the country to PA and supports local firms and jobs. PA's $764 million mushroom industry creates significant economic impacts through the Commonwealth. The industry generates $322 million in indirect and induced spending, with the total economic impact of the mushroom industry totaling $1.1 billion, and supporting 8,600 jobs with $287 million in employee compensation.

Learn more about the mushroom industry

Learn More About How Mushrooms Grow

SITE MAP
Back to top